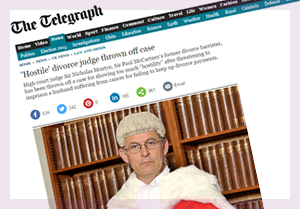 It isn’t often that a top divorce judge is taken off a case. However, as reported in the Telegraph, that is precisely what happened when High Court judge Sir Nicholas Mostyn was said to have used “intemperate” language and showed too much “hostility” during a recent divorce hearing.

Sir Nicholas is perhaps best known as being Sir Paul McCartney’s barrister during the musician’s divorce from Heather Mills. In the end, although Ms Mills had initially argued for as much as £125 million, she instead walked away with just under £25 million.

In this instance, the judge was hearing an ongoing case about a mining tycoon and his ex-wife, who had been awarded £2 million in their original divorce settlement.

Shelley Mann claimed that her ex-husband David, had failed to maintain his divorce payments, resulting in her falling behind in rent payments to the sum of £50,000 and being threatened with eviction.

In his defence, Mr Mann argued that he was suffering from cancer and had “run out of money”.

In response, Sir Nicholas requested that Mr Mann appear before him in his private chambers and, during the ensuing conversation, the judge is said to have threatened him with imprisonment if he didn’t pay the requested amount, despite his alleged medical condition and apparent financial predicament.

Lady Justice Macur, in a subsequent Court of Appeal hearing, ruled that the judge had “made up his mind” about Mr Mann’s ability to pay. Transcripts from the private meeting, she indicated, revealed that Sir Nicholas’ frustration was palpable – frustration which she believed stemmed from his “obvious” belief that Mr Mann was deliberately and maliciously avoiding his legal and moral responsibilities to his ex-wife.

She added that she considered Sir Nicholas to be compromised in continuing with this specific case and went on to rule that the Mann divorce settlement proceedings should be put before another judge.