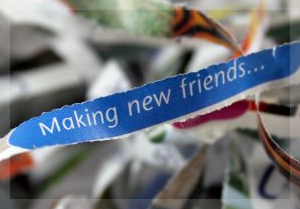 After a certain amount of time with the same partner, post-divorce dating might seem like a minefield. In this blog, we consider some simple (and supposedly scientifically proven!) ways to help your dates go as smoothly as possible.

Scientific studies indicate that it only takes four minutes for us to decide whether or not we are attracted to someone. As such, it is important to be yourself and act as naturally as possible, no matter how nervous you are feeling. Just remember that a date is just a chance to get to know another person, to share each other’s ideas and experiences, and- not to be forgotten- to have fun!

Said in More Ways than One

Most of us worry about what to say on a first date, however recent studies show that in an initial introduction such as on a date, we pay more attention to how things are said, rather than what is actually said. Over 55% of initial attraction is based on body language and 40% on the tone and speed of someone’s voice, leaving a very minimal amount of focus on the content of what is said. Krystal Baugher, founder of ‘Mile High Mating’ dating website, flags the self-grooming as a tell-tale sign to reveal interest in each other; fiddling with hair or twiddling jewellery are examples of how we subconsciously and subtly display our desire to remain attractive in our date’s eyes. Baugher also highlights the importance of physical contact to decipher your date’s level of interest and connection for you. Whether just a playful push on the shoulder or a touch on the hand, your date’s reaction to skin-on-skin contact will be enough to tell you whether to pursue or push off.

Studies that look at what happens when people fall in love show that endured eye contact has a significantly powerful impact on feelings of love for the other person. New York psychologist, Professor Arthur Arun, completed a study in which strangers were asked to reveal intimate details about themselves for an hour and a half, before staring into each other’s eyes for four minutes. After this exercise, the majority of the participants reported strong feelings of attraction for their partner; two couples of whom even married later down the line!
Move Match
We have all heard the well-known saying that imitation is the greatest form of flattery. This idea extends to social settings, as when we admire someone or feel attracted to them, we subconsciously mirror their body language, physical gestures or posture. Mirroring marks engagement in what the other person is saying, as well as indicating your similarity- and thus compatibility- as a partnership. Remain conscious of reflecting your interest in the person through the way you hold yourself; slouching, folding your arms or pointing away from your date does not indicate interest!

Feel the Fear and Do it Anyway!

An experiment indicates that when intense feelings are felt on a date, such as fear or excitement, these people are more likely to interpret these as feeling of love for their partner. In fact, those who feel the same levels of thrill and excitement are more likely to be compatible. Again, a level of similarity in this respect may mean that you have more in common with your partner, and thus greater compatibility in the potential future relationship.

Of course, the way someone looks is only a very small part of who they are. On a deeper level, however, someone’s appearance could act as an indication of the quality of the person’s genes, as well as a reflection of this person’s values and social identities. Scientific studies into physical attraction based on appearance show that men find attractive a woman with large eyes, red lips and delicate features, whilst women tend to be drawn to a man with a strong physique, indicating power and the ability to protect, and a strong jawline. Across different gender preferences, it has been found that both men and women are drawn to symmetry in a person’s face. Studies so far suggest that symmetry is an attractive quality for one of two reasons; either because this symmetry is a sign of strong health, good genes and a well-functioning immune system, or because it is easier for the human visual system to process symmetric stimuli than non-symmetric.

When it comes to a woman’s size, the idea of what is ‘sexy’ has varied greatly throughout the years. What has stayed consistent, however, is more of a ratio game. Over the years, male participants in experiments have consistently reported a preference for a woman with a waist-to-hip ratio of 0.7. Researchers suggest that this consistent feature of attraction is because this ratio is an indicator of a woman’s reproductive health, commonly known as ‘child-bearing hips’.

Is Variety Really the Spice of Life?

Have you noticed how married couples tend to look quite similar? Studies have shown that we are particularly attracted to those who look most like we do. Again, this might be because similarity is a comforting aspect for us when considering our future partner, indicating a mutual understanding and even compatibility of ideas of appearance.

Along with all these findings, research has also found correlations in couples between their lung volume, middle finger length, overall ear size and even metabolic rates!

Most recent studies into what people look for in a future mate tell us that a subconscious desire for both men and women is to find someone who looks like their parent of the opposite sex to them. Whether personality, sense of humour or physical appearance, some women may seek out a man who seems similar to their father, whilst some men may subconsciously want to see an aspect of their own mother in their future partner. Cognitive psychologist Devid Perrett, from the university of St Andrews, Scotland, has developed a complex facial recognition system to study people’s reactions to different faces. Perrett took images of student’s faces and morphed them into the opposite sex, before asking the individual which face out of many they find most attractive. Throughout Perrett’s studies, students consistently showed the most amount of interest in their own, morphed faces, even when they don’t recognise it as theirs. Perrett suggests that we find our own faces attractive because they remind us of what is comfortable, known and what we looked at in our early years as children.

Obviously, the initial dating phase is an exciting part of a new relationship, but the concern as to the durability of the partnership inevitably comes to our minds. Several studies into behavioural genetics show that a person’s tendency to divorce is written in their genes. When scientists studied identical twins, they found that whatever their degree of marriage success was, they often share it with their sibling, with male twins having similar numbers of divorces as their brothers. It could also be argued that children who have witnessed divorce in their parents are more likely to consider divorce themselves.

Of course, statistics aren’t necessarily the best indicators of whether a relationship will endure the tides of life. Recent research into marital successes concentrates more on factors such as how and when couples met, how the couple resolves conflict and how similar each person’s expectations are.

Fundamentally, we will never really know how well a date will go, especially if we do not go out and try..

For advice or an idea as to how to find a partner that matches your values and interests, take a look at The County Register. This introduction agency has a reputation of helping recently separated singletons find a compatible other with whom they can share similar interests and life experience to build a relationship together.